Sherri Evonne Shepherd (born on April 22, 1967 in Chicago, Illinois) is an American comedian, actress and a current co-host on the ABC daytime talkshow The View. In addition to stand-up comedy shows and small roles in several American sitcoms, Shepherd had a regular supporting role in the ABC sitcom Less Than Perfect during its four season run. 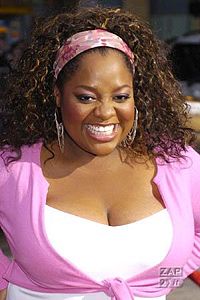 Shepherd was born in Chicago. At age 11, her family, which includes Shepherd's three sisters, moved to Hoffman Estates, a Chicago suburb. Raised in a Jehovah's Witness family, Shepherd later chose to become a born-again Christian in her adulthood after moving to Los Angeles, California.

Shepherd worked a day job as a legal secretary while doing stand-up comedy at night. Her first TV role was on the show Cleghorne!, starring former Saturday Night Live cast member Ellen Cleghorne. Three years later, she pursued acting and stand-up comedy full-time, working again as a legal secretary in the meantime. She had guest roles on Friends, Living Single, as well as regular roles on Suddenly Susan and The Jamie Foxx Show. Her most visible role was as Ramona Platt on Less Than Perfect. The sitcom ran on ABC for four seasons, with the last episodes airing in 2006. She is developing a half-hour scripted sitcom based on her life for The CW Network.

Shepherd has branched out to film, with roles in Guess Who, Beauty Shop and Cellular. She still performs standup comedy at Los Angeles area clubs like the Comedy Store and the Laugh Factory. She has also been a frequent and popular guest on Ellen DeGeneres' syndicated daytime talk show, The Ellen DeGeneres Show for which she holds a record for being on the show the greatest number of times. She currently has a recurring role on 30 Rock as Angie Jordan, the wife of Tracy Morgan's character Tracy Jordan.

Shepherd is married to comedian Jeff Tarpley (aka Jeff T. Aware); they have a son, Jeffrey Charles. Though on the road to divorce after discovering that her husband was having an affair, Sherri Shepherd reported on The View on May 23, 2007 that she and her husband were back together. Tarpley had a child during the affair and Shepherd said she thought it would be wrong to keep the children apart. However, on September 21, 2007, View watchers learned that the reconciliation, which included marriage counseling, did not go well: Shepherd noted during the show's Hot Topics segment that she and Tarpley are again separated and a divorce is under way. Shepherd has also noted that she has been diagnosed with diabetes.

The text in this article is based on the Wikipedia article "Sherri Shepherd" used under the terms of the GNU Free Documentation License or the Creative Commons CC-BY-SA license. See Boobpedia's copyright notice.
Retrieved from "https://www.boobpedia.com/wiki/index.php?title=Sherri_Shepherd&oldid=718825"
Categories:
Hidden category: