Mia Malkova worked at a McDonald's when she was 16 years old and for the Sizzler restaurant chain prior to her involvement in the adult entertainment industry. Was introduced to the porn film industry by Natasha Malkova, who Mia has known since the second grade in elementary school. She first began performing in explicit hardcore photoshoots and movies in June 2012 — a new beautiful blonde with a great smile, super flexible body, eyecatching bubble butt, and with four names to her credit so far. At ATK Galleria as Madison Clover and at Zischy as Madison Swan. At Amateur Allure as Madison S; soon to be at FTV as Jessica and at Jesse Loads Monster Facials twice: once as Madison Swan and once as Madison Clover. She chose the name Mia Malkova to sound more Russian, indicating in an interview that she felt it a more appealing name like that of a European supermodel.[2] She has also performed under several other pseudonyms (Angel at Body in Mind and Mia Bliss at Reality Kings) but mostly under her Russian-styled name. ATK Galleria, Zischy, and Reality Kings later changed her aliases to Mia Malkova.

In 2012 among the notable companies Mia has appeared in X-rated features for Elegant Angel, Girlfriends Films, Lethal Hardcore, FM Concepts. She was accomplished as Twistys Treat of the Month for December, 2012.

Mia Malkova won the AVN Award for Best New Starlet in 2014, AVN Award for Best All-Girl Group Sex Scene, ans has 5 other AVN nominations. She won XRCO Award Cream Dream of the Year and was nominee for XRCO New Starlet of the Year. Also she has 3 XBiz nominations. She was very buisy with shootings at Brazers and Digital Playground. In October 2014 Mia Malkova signed an exclusive contract with Hard X, which lasts the duration of 12 months and includes a star showcase. “I am very excited to be a part of Hard X,” says Mia Malkova. “Hard X has a unique way of shooting scenes that you don’t see anywhere else and I can’t wait to shoot new projects with Mason again. I hope the fans enjoy what we have coming up!” Mia Malkova’s first scene under the agreement has appeares in Super Cute: Vol. 2, directed by Mason. “I had a brief opportunity to work with Mia before she went under contract previously, and she left me wanting more and more,” says Mason. “I would have waited forever to work with Mia again. She is the total package, unparalleled beauty, inside and out. I’m honored and thrilled to have this year to celebrate all things Mia!”[4] Since then Mia Malkova has a long list of videos and photo sets at Hard X and Erotica X, a sister site of Hard X. In March 2016 Mason directed and released another Mia’s profile film Mia.

Malkova had a breast enhancement on 2 July 2020 as a 28th-birthday present to herself, saying that it was "something I’ve wanted for years now!"[5][6]

Note: The other model named Mia (redhead with small nipples) was featured in Mayfair January 2016 (U.K.), Vol. 51, Iss. 01, but her photoset is listed at Mia Malkova’s model page.

In 2018, it was announced that she and Mountain have separated. [8] 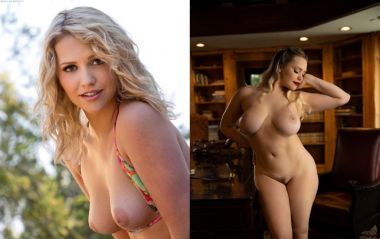 Mia Malkova before and after breast enlargement