Mariah Carey (born March 27, 1970 in Huntington, New York) is an American singer and actress. With sales of over 200 million records worldwide, she is one of the best-selling music artists of all time. Carey has amassed an extensive catalog, with nineteen of her songs topping the Billboard Hot 100, and holds the record for the most number-one singles by a solo artist, a female songwriter, and a female producer.

Carey probably received her breast implants as early as the late 90s. There is evidence this likely happened after her divorce from her first husband Tommy Mottola. The image on the left is from 1991 at the 33rd Annual Grammy Awards and the image on the right is circa 2010. 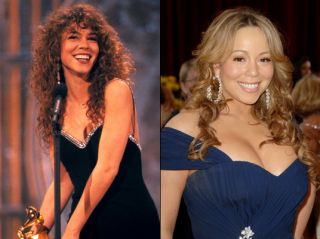 Mariah Then and Now

In 2005, Mariah came out onto a balcony and waved to her fans, wearing a shiny beige dress that was so tight that her nipples poked through the fabric and her areolas became visible.[3]