Ann Marie was a big-bust model, stripper, and B movie actress.

Ann Marie attended the University of Illinois before dropping out to pursue a career in nightclub dancing in Sarasota, Florida, in 1974. As a feature dancer, she earned up to US$3,500 a week. 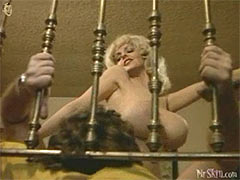 Russ Meyer introduced Ann Marie to the world in an uncredited role in Supervixens (1975), in which she had a very short topless cameo as she mounted her husband in bed.

While she only appeared in a few films, Russ Meyer secured her memory in cement thanks to her role in Beneath the Valley of the Ultra-Vixens (1979).

In this movie she played a huge breasted evangelical radio preacher. What made it memorable was the satirical message that she really just used her religious listeners for sex. Her impossibly tight shirts only came off in two occasions though.

The first time was when she mounted an old guy in a symbolic coffin, thus giving an original sexual interpetation to the concept of revival of the spirit and body. 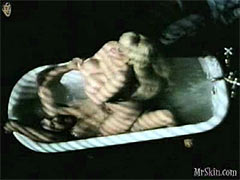 Ann Marie in Beneath the Valley of the Ultra-Vixens (1979). From <protect>Mr Skin</protect>

The second and even more memorable time was when the protagonist took off his pants and asked her for religious help in solving his obsession with anal sex (which torn apart his marriage). When our eager preacher spotted his erection, she immediately left her booth and took him to her bathtub. Then she told him to wait while she changes cloths. Next thing we know, our friend is getting cleansed and baptized through her mounting him and almost drowning him under her huge breasts. Always a supporter of gender equality, Meyer intermixed the scene with that of the protagonist's wife cheating on him herself (of course, in her case it is clear she did not enforce herself on her lover).

Before dissapearing almost as soon as she arrived, she re-surfaced in the early 1980's in a direct-to-video softcore, called For Your Breasts Only. Her part there was that of an unnamed gymnast with a huge cleavage.